A look at the short lived tenure of one of Manchester United’s most infamous and controversial kits. 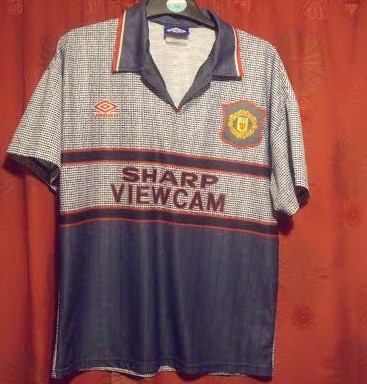 In the summer of 1995, Manchester United unveiled their new away strip, to take the place of the now legendary black kit. It was revealed to be a two-tone grey shirt, dark grey shorts and socks. As with the black strip, this was the first time United had used that particular colour. This was, of course, a time where a kit would generally be used for two seasons rather than one. The grey strip lasted less than nine months.

Reactions to the new strip were mixed. Some fans were of the opinion that it made a nice shirt to wear to the pub, but didn’t really work as a football kit. As it happened, those opinions turned out to be more accurate than they could have ever imagined.

United started the 1995-96 season with an unfamiliar look, and not just because of the grey shirts. Paul Ince, Mark Hughes and Andrei Kanchelskis had all been sold over the summer, much to the dismay of the fans. Andy Cole, Steve Bruce and Ryan Giggs were injured, and Eric Cantona was still suspended following his attack on a supporter at Crystal Palace earlier that year.

Although names such as Nicky Butt, Paul Scholes and the Neville brothers had been successfully blooded into the team the previous season, they been done so carefully. They hadn’t all been thrown into the deep end together as a unit in a Premier League game. Aston Villa away was a much different prospect to Port Vale.

In the bright sunshine at Villa Park, United’s youthful side were run ragged, and found themselves 3-0 down at half time. They played much better in the second half after bringing on David Beckham, who scored a superb long range strike to reduce the deficit, but the scoreline spoke for itself. Alex Ferguson’s side had been given a good hiding. A certain pundit couldn’t contain his delight, smugly declaring that United “wouldn’t win anything with kids”. It is easy to see how he jumped to this conclusion, but will be reminded of it for the rest of his days. In spite of how the season turned out, things looked grim for Manchester United at this point.

It would be another three months before the grey kit was used again, when United went to Highbury in November to play Arsenal. Ferguson’s young team had shown that the Villa game was no more than a blip, and that they were more than up to the task. At that time Newcastle United led the table, but the Red Devils weren’t too far behind them.

Once again, United had no luck in the grey kit, with the usually infallible Denis Irwin making a mistake that led to Dennis Bergkamp’s winner. To add insult to injury, Cole had a goal disallowed, which rather mirrored his own personal luck at that time.

The next outing for the grey strip was at Nottingham Forest, which saw United pick up their first point while wearing it. Despite going a goal behind at the City Ground, an Eric Cantona penalty cancelled out Paul McGregor’s opener. It was the only time United wore the grey kit without losing.

Next up was the ultimate test for any United away kit; Anfield. United hadn’t won a game in almost a month when they travelled to Liverpool, and didn’t exactly head into this game brimming with confidence. Liverpool must have sensed this, as they took control of the game from the first minute, and a Robbie Fowler double gave them a comfortable 2-0 win.

The grey kit was meant to be used primarily for the league, as United demonstrated when they played York City away in the League Cup using their blue and white striped kit. This was also when they exited the competition following an embarrassing 3-0 home defeat in the first leg.  They also wore the blue and white kit in the F.A. Cup, in the third round replay at Sunderland, a 2-1 victory at Roker Park.

Whether or not United had an inkling that the kit may be unlucky is hard to say, but they used an interesting choice of attire for the trip to Upton Park. United have always reverted to an away kit of some description when travelling to West Ham, but chose to go with their red home shirts with black shorts in January 1996. This is something they haven’t done before, or since, and a lovely angled shot from Eric Cantona sealed a 1-0 win. You could probably be forgiven for wondering if they would have won that game had they wore the grey kit.

The final straw for the kit came at The Dell, and one of the most infamous incidents in Premier League history. United’s shirts were the only grey thing on show on a gloriously sunny day, and a similarly dazzling performance by Southampton. Because their hosts wore black shorts and socks, United switched to white ones, so as not to clash.

Ferguson’s side were 3-0 down well before half time in an awful display, which contrasted with some superb form in recent matches. When they came out for the second half in their blue and white strip, it made headlines across the country. Incredibly, United played like a different team in the second half, conceding no further goals and adding a consolation from Giggs.

Some reports state that the players had complained that they were struggling to pick each other out because the grey shirts were clashing with the bright sunshine. Others report that it was the manager who told them to change it, without any complaints from the players. Whether or not the change to the blue and white kit was the reason for their improved second half display, or just an almighty rollicking from Alex Ferguson, we’ll probably never know. The only definite was that Manchester United never wore the grey kit again. They retired it with a record of five matches, four defeats and one draw.

The defeat at Southampton was a blow to United, but they won their last three league games to take their third title in four years. Their final game of the season was at Middlesbrough, whose red shirts meant that United would be required to wear an away strip. Unsurprisingly, Ferguson sent his men out in the blue and white strip, and they romped to a 3-0 victory to confirm them as champions. The F.A Cup Final against Liverpool was a week after this, but United did not require an away strip at Wembley. Having won the coin toss, they wore their red shirts, and went on to win the Double.

In the close season, Manchester United announced that they would be replacing the grey strip with a simple white one. The shirt was available at a cost of £25, whereas the average price for a new one in 1996 was £40. The 1995-96 grey kit has now become something of a collector’s item, as well as being butt of many a joke about anyone wearing it being invisible.

Last week, Manchester United unveiled their new third strip, and for the first time in 21 years, the players will take to the field in an all grey change kit. It was designed by a United fan, and etched into the design is an image of the front of Old Trafford, viewed from behind the “United Trinity” statue of Denis Law, Bobby Charlton and George Best. It is a much lighter shade than the previous one, with the club’s official Twitter account declaring it to be silver.

It is probably understandable that it took the club this long to dabble with the colour grey again, given how they never won a game in the previous strip. It’s possible that, having seen plenty of clubs use the colour over the years, they figured it was time to move on from that way of thinking.

One thing that is certain, however, is that United have never won a match while wearing grey, 22 years after first sporting the colour. Everyone at the club will be determined to rectify that situation this season.