A new series of articles focusing on certain kits that Manchester United have worn over the years. We begin by focusing on one of the most iconic of the Premier League era. Apart from being a really smart strip, it was also one that saw plenty of action and controversy during its two year tenure.

The summer of 1993 was a glorious one if you happened to be a Manchester United fan. 26 years of frustration had been ended in the most glorious fashion, with the Red Devils clinching their first league title in over a quarter of a century. It was the perfect conclusion to a year full of unique firsts, as it was also the inaugural season of the Premier League, and United’s kits had been manufactured by Umbro, bringing a twelve year association with Adidas to an end.

During the close season, United kept the flow going by adding another first to the list. When their new away kit was launched, it marked the first time in the club’s history that the team would play in an all-black strip. And what a beautiful kit it was, with yellow and gold trim adorning the sleeves, collar, shorts and socks. A new addition to the sponsor on the front was evident, too. United’s main benefactor at the time, Sharp, had added the name of their latest invention, the Viewcam, a camcorder with a little screen at the side so you could playback your home videos without needing a VCR.

The sleek new black kit was given its debut at Villa Park, and what a fantastic match it was. United won 2-1 but this was a match that could have gone either way. Lee Sharpe had put United ahead midway through the first half, before the late Dalian Atkinson equalised with a thumping effort smashed past Peter Schmeichel. The match was end to end stuff, with both teams hitting the post, and both goalkeepers being forced into tremendous saves. The game was won, however, when Paul Ince hit a beautiful through ball to put Sharpe one on one with Nigel Spink. He slotted it past the goalkeeper, and for the second time that evening we were treated to the “Sharpey Shuffle”.

United’s next game was away to Southampton, and it would see Eric Cantona wear it for the first time. He christened the kit in style, scoring with a beautiful chip from the edge of the area. It would be more than three months, however, before the kit was seen again, in a 3-0 away victory over Sheffield United.

The kit was given its Anfield debut in January, in what must have been a thrilling game for the neutral. Manchester United took a three goal lead inside 25 minutes, with goals from Bruce, Giggs and Irwin, but by half time a brace from Nigel Clough had pegged it back to 3-2. Neil Ruddock then headed home ten minutes from time to earn Liverpool a draw that Alex Ferguson was so incensed with, he temporarily transfer listed Schmeichel.

The following month saw Paul Ince snatch a late equaliser against his old club West Ham United at Upton Park. He silenced the boo-boys, who had been calling him “Judas” throughout the game, having never forgiven him for the way he went about his transfer to Old Trafford.

Between the years of 1993 & 1995, it seemed that when Manchester United were in the headlines for the wrong reasons, they were often wearing the black strip. Unsurprisingly, most of these incidents had United legend Eric Cantona at the heart of them, whether it was his fault or not.

In March 1994, the Frenchman was sent off twice in the space of four days, and both times United wearing the iconic strip. The first, at Swindon Town, was richly deserved after Cantona stamped on midfielder John Moncur. The second, at Highbury, was a joke. He merely collided with Arsenal captain Tony Adams, who simply got up and carried on, and the referee produced a second yellow card of the game. Cantona was rewarded with a five game ban for his troubles.

January 25th 1995 is a day that every Manchester United will fan will remember where they were, and what they were doing, when Cantona launched himself over the advertising boards at Selhurst Park. Having been sent off for kicking out at Crystal Palace defender Richard Shaw, Cantona was walking to the tunnel. A so-called fan by the name of Matthew Simmonds decided to hurl a string of racial insults at Cantona, who jumped over the barrier and executed a flying kick at the hooligan. Landing on his feet, he then punched him in the head. Cantona was charged with assault, and originally jailed for two weeks, although this was reduced on appeal to 120 hours of community service. He was also banned for eight months by the F.A.

Manchester United dropped several points while wearing the black kit in the 1994-95 season. Their only win while wearing it came at Villa Park, another 2-1 win, but in a game nowhere near as entertaining as the previous year. This victory, however, came just four days after United had been humbled 4-0 by Barcelona in the Nou Camp. That was the only occasion where the word “Viewcam” didn’t feature on the shirt, apparently for advertising reasons.

The game in which Cantona had kicked the hooligan finished 1-1, with Gareth Southgate cancelling out a goal from David May. One particularly memorable goal was by Andrei Kanchelskis at Nottingham Forest, a superbly executed volley, but that game also finished 1-1. United drew 0-0 with Arsenal at Highbury, and lost 2-0 at Liverpool. The latter saw Ferguson once again bring out the Anfield hairdryer treatment, though this time his chosen victim was Paul Ince. The midfielder had apparently not followed a specific instruction, and his manager blamed him for Liverpool’s first goal.

By now, Manchester United had launched a blue and white striped third shirt, with the names of all of the players who had represented the club up to that point woven into the design. The black strip now shared the stage with this new one, but for the last day of the season, United gave it a final bow. Unfortunately, it was not to be a happy ending.

Blackburn Rovers were two points ahead of United going into the last game of the season, and their final fixture was away to Liverpool. United, with a much superior goal difference, had to travel to West Ham. Blackburn took the lead through Alan Shearer, and Michael Hughes scored for the Hammers, and it looked like Rovers were home and dry. When Brian McClair equalised for United, and John Barnes did the same for Liverpool, there was suddenly all to play for.

Try as they might, United could not get a second goal past Luděk Mikloško in the West Ham goal. Andy Cole had already hit the post, and was denied several times by the Czech goalkeeper, as were plenty of other United players. It just wasn’t United’s day, and even though Jamie Redknapp scored a late free kick to win the game at Anfield, it wasn’t enough to deny Blackburn the title.

The black United kit is seen by many as the best away kit the club has ever had. Instantly recognisable, for so many reasons, and it is unbelievable that twelve months from now it will be 25 years old. United changed their away kit to a grey strip for the 1995-96 season, which is now legendary for different reasons.

In the years that have passed, United have had several other black strips, and have a new one coming out this summer, although tinged with white it may produce a grey effect. It is also worthy of note that in both of United’s Champions League winning seasons, they have had a black kit, be it the away or third strip.

None of the others brought out after it, however, have left the legacy that the 1993 one did. 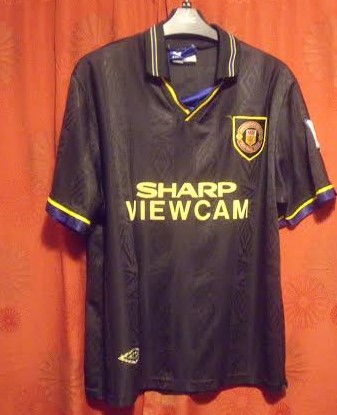