The latest instalment into Manchester United’s classic kits over the years looking into a one of a kind strip.

In December 1994, Manchester United announced that the Green & Yellow third kit would be replaced by a Blue & White striped attire. There are two reasons that this was such a unique kit, the first being that it was the first time United had a blue and white striped design for over 70 years. The second was that the names of every single player who had played for the first team, up until that point, was etched into the design.

For many United fans, Umbro are their favourite kit designers. This is not only for the fact that, during the ten years that they produced United’s shirts, the club dominated English football. There was also the feeling that their designs were more personal to United as a club. Many of their kits worn by the Red Devils were design that were exclusive to United only. Most of the other clubs on their books were given the generic kits, familiar to football fans across Europe. This one, in particular, was a real one off.

That was the exact reaction of some United fans when the kit was unveiled. While the Red Devils have been kitted out in blue many times over the years, they hadn’t had a design resembling the Hillsborough club since the 1920’s. Very few people that were around when this kit was unveiled remember that particular strip.

The shirt itself wasn’t exactly a standard blue & white striped design. It was a white background, with a large blue stripe down the centre, accompanied by a smaller blue stripe either side of it. The stripes on the sleeves were of equal width to each other. In the centre stripe, there was an etching of the crest that United wore on their shirts in the 1968 European Cup Final victory over Benfica.

The fact that United play in blue at all is still a bone of contention for many fans, but most just accept it. After all, it’s not as though they play in light blue, other than for a certain period between 1990 & 1992. There is also the fact that, when United became the first English team to conquer Europe, blue was the colour they wore while doing it.

The second unique attribute of this particular kit was the fact that the surname of every player who had made a first team appearance was etched into the design. There was a rumour that Brian McClair and Paul Ince had been missed off it, despite the fact that they both still played for the club at the time. These rumours, however, were unfounded and both players’ names were immortalised on this memorable kit.

The new strip was given its first airing on 31st December 1994, in a 2-2 draw with Southampton at The Dell, a game which saw Nicky Butt score his first goal for United. Although this was a Premier League game, the kit was intended to be used in the cup competitions. As a result, the blue & white stripes did not have to wait too long for their second appearance, as United were drawn away to Sheffield United in the F.A. Cup third round. The main memories of this game were a swirling wind affecting the playing conditions at Bramall Lane, Charlie Hartfield being sent off for slapping Eric Cantona, and the Frenchman having the last laugh by killing the game off with a superbly executed chip to seal a 2-0 victory.

United’s fixture list meant that they did not have to use a change strip too many times for the rest of the 1994-95 season. The infamous, Cantona-kicking-a-fan trip to Selhurst Park, the 2-0 defeat at Anfield and the despair of losing the title on the last day of the season were all played out in the black kit.

The only other appearance the blue & white strip made that season was in the F.A. Cup semi-final at Villa Park. United had been drawn against Crystal Palace, and found themselves a goal down until a fantastic 30 yard free kick by Denis Irwin pulled them level. The game went into extra time, and Chris Armstrong put Palace ahead once more, but Gary Neville’s long throw into the box was nodded home by Gary Pallister to force a replay. United wore their home strip for the rematch, and goals by Bruce and Pallister earned a 2-0 victory. That game was more famous for Roy Keane stamping on Gareth Southgate, and the horrific killing of a Palace fan during the aftermath of the first match.

From Cup Kit to Only Kit

Ahead of the 1995-96 season, Manchester United unveiled a new away kit to replace the all black strip. On Premier League away days, the Red Devils would now be kitted out in a two-tone grey strip, with the blue & white strip used in the cup competitions. But that’s not quite how it worked out.

United first donned the blue & white strip that campaign for a League Cup tie at York City. The Red Devils had played a number of youngsters in the first leg, but it was still a major shock when the visitors came away from Old Trafford with a 3-0 win. In the second leg, Alex Ferguson responded by recalling Schmeichel, Cantona and Cole, among others, to try and turn the tie around. Paul Scholes scored twice and youth team product Terry Cooke got his only goal for the club. Unfortunately York City scored as well, meaning that United were out of the competition, despite winning 3-1.

Because United had been eliminated from the UEFA Cup at the first hurdle, it would be January before the blue & white kit made its next appearance. Once again, United had stumbled to lower league opposition at Old Trafford, in this case Sunderland, drawing 2-2 in the F.A. Cup. The replay at Roker Park didn’t exactly get off to a great start for United, as they found themselves 1-0 down at half time. Scholes produced a piece of magic in the second half to draw United level, just when it looked like they were about to exit another cup competition. With extra time looming, Lee Sharpe sent over a cross from the left wing which was met by the head of Andy Cole, and sailed into the back of the net.

By the next time the blue & white stripes were called into action, Manchester United had already secured a place in the F.A. Cup final against Liverpool. It seemed likely that the kit would not be needed again, as United had won the toss to decide that they would wear their home kit at Wembley. When the Red Devils visited The Dell to face Southampton in April 1996, they were kitted out in the grey strip, but disaster struck in the first half. As they trooped off the pitch towards the dressing rooms at half time, United were already 3-0 down. The players were complaining that they were unable to pick each other out in the bright sunlight, claiming that it was clashing with the grey shirts. It made headlines across the country when Ferguson sent them out for the second half in their blue and white strip. In fairness, United did play better in the second half, and pulled a goal back, but still lost 3-1, denting their title chances.

On the final day of the 1995-96 season, United lead the Premier League table by two points, and faced Middlesbrough at the Riverside. Ferguson was taking no chances, and sent his players out in the blue and white strip. United took an early lead through David May, and second half goals from Cole and Giggs sealed a 3-0 victory to ensure that the trophy returned to Old Trafford for the third time in four years.

Another fact that made the blue and white striped kit unique is that it is one of only two away kits that Manchester United have used in three separate campaigns. They only wore it once during the 1996-97 season, and strangely enough its final appearance was at the same ground in which it made its first.

An absolute cracker of a game at The Dell saw Southampton beat United 6-3, with a hat trick from Egil Østenstad (although the Dubious Goals Committee awarded one of them to Phil Neville). This game also saw David Beckham score his first direct free kick for the club, and a sending off for Roy Keane. This came less than a week after Newcastle had beaten United 5-0, meaning that Schmeichel had conceded eleven goals in just six days.

After United scrapped the grey kit, a simple white shirt replaced it for the Premier League away games. Towards the end of 1996, the club unveiled a new all blue third kit, which would take on the mantle of the clubs “Cup Kit”. The blue & white strip would never make another appearance, but it lives long in the memory of the supporters.

Although some Manchester United fans were not impressed with the blue and white striped kit at first, most soon accepted it. It certainly sold a lot of replicas, and is now looked back on as a classic United kit. This is not much of a surprise, as the club had many memorable moments in this kit.

From Cantona’s chip at Bramall Lane, Irwin’s free kick against Palace, to changing kits at half time against Southampton and finally regaining the Premier League title, this kit saw it all. Maybe the reason why United have never tried to replicate this kit with a similar design is that they don’t want to tarnish its memory. 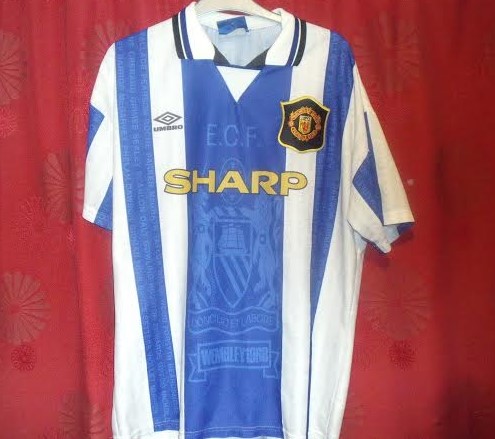